Marketing Fails: And how to avoid them 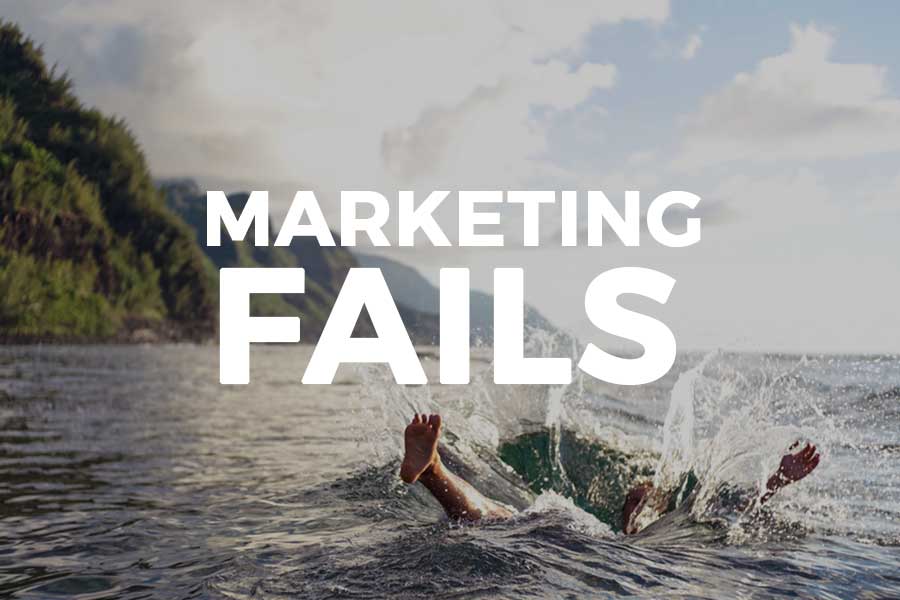 There have been many notorious marketing campaigns over the years where a faux pas has created a PR nightmare or a slump in sales. Sometimes they’re bad decisions and sometimes bad luck but many are avoidable…

To get us on the right path let’s start off with an example of what not to do..

The New Coke campaign by Coca Cola in 1984 has gone down in history as one of the greatest marketing mistakes in history. The release of New Coke, and subsequent axing of their existing formula, led to a huge drop in sales.

When it was released customers expressed on the whole their dislike of the new flavour. This is despite Coca Cola conducting a market research study on over 200,000 consumers and having an overwhelming preference to New Coke over both Pepsi and Coke.

So why did no one like it when it was released?

One possible reason is that the study was flawed. Participants only sipped the drink and in a single taste, liked the sweeter taste of New Coke better. But that’s different to drinking an entire can or bottle. This probably wasn’t the main reason that it wasn’t well received though…

Likely the main reason this campaign failed was because Coke didn’t take into account how much people choose products based on the identity it represents. By taking away the existing flavour, Coke was removing the identity from their brand that they had built over the last 100 years and the loyalty so many consumers had to that brand.

The lesson the New Coke campaign demonstrates is that it’s important to understand why customers buy your product. In the land of soft drinks, Coke thought their products were preferred based on flavour when in fact the identity and lifestyle associated with the drink (due to their own marketing) was actually a much stronger influence on consumer preferences.

Big marketing blunders can sink a business but the most common campaign failures are the ones that go unnoticed – the ones that don’t sell anything because they didn’t offend but they didn’t appeal either. For a campaign to be successful it’s important to test ideas, to understand your market and to understand why people buy your product. How do you do that? Research, analyse & test.

Conducting market research is one thing but understanding it is another. If you don’t know why your product appeals to your target market you are risking Coca Cola’s mistake. Growing and finding new markets to break into is all well and good but if you lose all your hard won loyal customers in the process then you’re throwing your money away. If you don’t know how to interpret your data, consult with marketing experts. It could be the difference between a marketing fail or success.

When you think you’ve got a great campaign idea, the first thing you should do is test it. It’s something we do all the time at gocrossmedia. Big companies like McDonalds will test out a marketing campaign in a single small city or big town before rolling it out nationally. Of course most businesses don’t have that luxury. Testing can be as simple as showing your idea to a few other people across different demographics and conducting a survey with people in your target demographic. It can help you to find gauge if the campaign concept appeals to your target market and they’ll be quick to point out if they find it offensive or unappealing.